Clinical and radiographic evaluations were performed before and immediately after surgery, and one, three, six, and twelve months from surgery. Subsequently, all patients were examined once per year.

The clinical evaluation was performed by an independent physiatrist which was blinded for type of surgery, and included the physical examination with the measurement of ROMs of the hip and the HHS. The assessment of ROMs was performed with a universal goniometer according to standard measurement guidelines [18]. The HHS score ranged from 0 to 100 points and it was classified as follows: excellent (between 90 and 100), good (80–89), fair (70–79), and poor (< 70) [19]. At the last follow-up, the satisfaction of patients after surgery was evaluated with a self-reported scoring system including 4 stages: very satisfactory, satisfactory, moderately satisfactory, or unsatisfactory.

All patients had conventional radiographs in anteroposterior (AP) view of the pelvis and Lowenstein lateral view of the hip in both preoperative and follow-up evaluations. Two independent testers, one radiologist expert in musculoskeletal radiology and one senior orthopedic surgeon which was not involved in the surgery of these patients, were enrolled to grade the acetabular bone defects. Disagreements between the two testers were resolved by using the intraoperative description of the defect.

According to the classification of Paprosky et al [20], the acetabular defects were graded in the preoperative AP radiographs by using four bony landmarks: teardrop defect, ischial lysis, Kohler's line integrity, and superior defect with superior migration of the hip COR 20. and 21..

Radiographic assessments were performed by the radiologist expert in musculoskeletal radiology. The digital preoperative and postoperative radiographs in AP view were used to assess the LLD with the software Hip Arthroplasty Templating 2.4.3 running with OsiriX v.5.8.1 64-bit. The measurements were performed using the ischium and less trochanter as landmarks (Fig. 1 and Fig. 2). The preoperative and postoperative COR positions in the vertical axis from the interteardrop line and in the horizontal axis from the teardrop were also measured [17]. 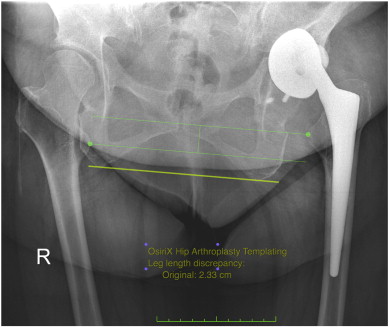 Preoperative radiograph (AP view) showing aseptic loosening of the acetabular cup with a Paprosky type IIIA acetabular defect in a 47 year-old woman. The radiograph demonstrates superior lateral migration of the hip COR (37 mm above the superior obturator line), preserved Kohler's line, ischial, and lateral wall of the teardrop osteolysis. The line tangent to both ischium bones is used as landmark of pelvis position. The two lines crossing the tip of the lesser trochanter of each femur respectively are used to measure the limb-length discrepancy. In the present case, the preoperative limb-length discrepancy is 23.3 mm. A 10-cm reference line is reported. 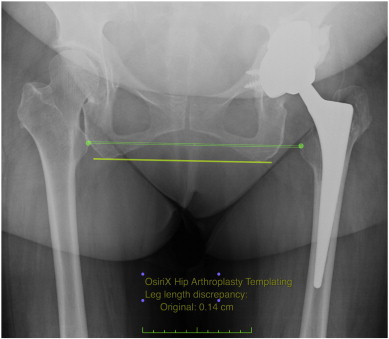 Postoperative radiograph (AP view) showing TM-coated cup and TM augment at one month in the same patient. The new hip COR is 15 mm above the superior obturator line. The preoperative limb-length discrepancy is 1.4 mm. A 10-cm reference line is reported.

The postoperative radiographs were assessed to detect radiolucent lines adjacent to the acetabular implant and/or augments according to DeLee and Charnley [22], or component loosening. The prosthetic construct was considered unstable if a radiolucent line with at least 1 mm of width crossed all three acetabular zones or if any component migration could be found. The fibrous stability of the construct was characterized by a radiolucent line with less than 1 mm of width crossing two of the three acetabular zones, while the construct was considered stable with presence of bone ingrowth if the prosthetic components were in close contact with pelvic bone and no radiolucent lines could be found in at least two of the three acetabular zones [3]. Loosening was defined by a change greater than 10° in the component abduction angle or if the whole cup moves 6 mm up or below, on vertical plane, or 6 mm medial or lateral, on horizontal plane, from his postoperative position [10]. The presence of heterotopic ossification was evaluated according to Brooker's classification [23].

Written informed consent was obtained from each patient before the surgical procedure. All procedures were performed through the posterolateral approach. The acetabular reconstruction was performed after the removal of failed components, debridement of the remaining acetabular cavity, and assessment of the acetabular bone loss. The location of the bony defect was reported by using a clock-face description where 12 o'clock indicated the side toward the head of patient, and 6 o'clock was the side toward the obturator foramen [24]. To clarify the data presentation, the site of defect was standardized to the right hip (Table 1).

Location of the Bony Acetabular Defect.

Because of the severe bone loss, in all patients no adequate primary stability of the acetabular trial could be obtained, and the acetabular tantalum augment (Zimmer, Warsaw, Indiana) was used to fill the defect and stabilize the cup. The number and position of the augments were determined by the bone loss pattern. The most common position was in the posterior-superior position. If necessary, the shape of the augments was modified with a metal cutting burr to provide an appropriate filling of the defect and increase the contact surface with the acetabular cup [10]. The median number of used augments was 1 (range, 1–3) (Table 2). The augments were fixed to the pelvic bone with a median number of 2 (range, 1–3) screws, maintaining the trial in place. The fenestrations within the augments and the remaining bony defects were filled with homologous morcellized cancellous bone in 26 hips and allograft cancellous bone chips in 29. No patient received a structural bone graft. The modular multi-hole shell (Zimmer, Warsaw, Indiana) was used in all patients, with a median diameter of 54 (range, 44–70) (Table 2). The cup was placed with a press-fit technique. Before impacting, polymethylmethacrylate cement was placed in the external surface of the definitive cup only in the areas facing the augments [8]. Finally, a median number of 3 (range, 2–7) screws was used to secure the acetabular component to the pelvic bone and increase the primary stability of the construct. Highly cross-linked polyethylene liner was used in all hips (Table 2). The bearing surfaces were metal on polyethylene in 35 hips, ceramic on polyethylene in 20.

All the analyses were performed using SPSS for Mac (version 16.0, SPSS Inc, Chicago, Illinois). The categorical data collected for the study were gender, preoperative diagnosis, type of acetabular bone defect, satisfaction of the patient after surgery, radiological loosening of the acetabular components, radiolucent lines adjacent to the acetabular implant and/or augments, and heterotopic ossification. The numerical data collected for the study were age, BMI, HHS values, ROMs of the hip, LLD, and cranial migration of the hip COR. Descriptive statistics was calculated. The statistical significance of improvement of HHS values, ROMs of the hip, and LLD was assessed using the two tails Wilcoxon signed ranks test for paired sample because the data were non-normally distributed. A P value less than 0.05 was considered significant.

Implant survival was defined as the time from first revision surgery with TM cup and augment to revision of acetabular prosthetic components for any reason and was estimated with Kaplan–Meier method. Ninety-five percent confidence intervals were calculated. 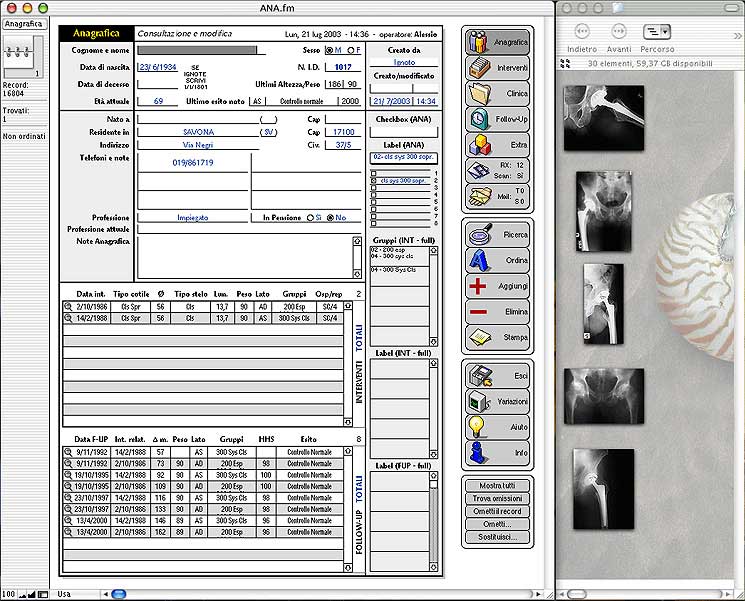